The summer is fast approaching and I am planning to ramp up the participation in some runs, swims and triathlons. Unfortunately Melbourne’s spring has been a shocker with plenty of wind and rain. This has particularly put me off getting on the bike as I am still fairly nervous about traffic. The big difference now is I seem to hear every car, whereas in the past I rode amongst traffic and didn’t notice them. 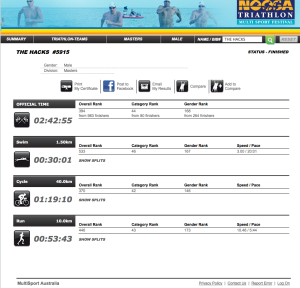 Our Noosa ResultsConsidering I now only ride in light traffic areas this is a big difference. This means I now do most of my riding indoors – I have purchased a new indoor bike. That will be the topic of the next blog.

Considering I now only ride in light traffic areas this is a big difference. This means I now do most of my riding indoors – I have purchased a new indoor bike. That will be the topic of the next blog.

Over the last month I have completed a few competitive runs. Firstly it was off to Noosa to do the run leg of the Noosa Triathlon. It is the largest triathlon in the Southern Hemisphere and a spectacular occasion. If you are in to triathlon you must do this one at least once. Our team, The Hacks, consists of me doing the run leg, a close mate, Phil doing the bike and a local ring-in doing the swim. Phil has a bung knee but rides exceptionally well for his 66 years and our swimmer was very competitive. I exceeded my expectations running the 10km in 53:43 minutes whilst running in my sling. We finished 44/80 in the Masters category. The Hacks were pretty happy with this. 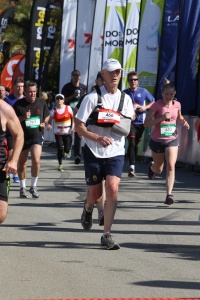 On 11 November I ran the City to Sea 14 km fun run in Melbourne. It is a flat, fast and subsequently pretty boring course. I had a great race doing it in 72:40. Getting very close to the 5 minute km mark which is the ultimate target. I was on track early but faded in the last 4km. Interestingly my arm therapist. Anna ran third in the female open. She is a gun and has represented Australia many times. In the lead up to the race she was approached for media stories and referred them to me. This led to two radio interviews about my brachial plexus injury and the challenge to get back to fitness. it was good fun doing the interviews.

Last weekend I was meant to do the first of the season’s triathlons but I pulled the plug as the wind and subsequent swell would have been too big a challenge for my one arm swimming technique. Can’t say I enjoyed pulling out!!!

I now need to plan the triathlons I compete in around the likelihood of rough water. Luckily there are a few where it is more than likely the water will be flat.

Tomorrow it is off to the surgeon. It is 2 years since the accident and I will find out if I need more surgery. Fingers crossed that I don’t.

I am a 58 years old. I am Senior Vice-Principal of Haileybury, Australia's largest private school. My passion outside of family and education is triathlon. I have raced over all distances with the highlight being completing the Ironman in 2011. Whilst training for my next Ironman I had an horrific accident which left me with a left brachial plexus injury.
View all posts by Craig Glass →
This entry was posted in Uncategorized and tagged Noosa Triathlon. Bookmark the permalink.