The months between Christmas and my first nerve surgery in March were very interesting in terms of my development. It was about allowing the body to rest and repair. I am not sure I saw that at the time!

My wife and I have a holiday home at Apollo Bay and we traditionally spend the weeks after Christmas and the New Year at the beach house with friends who have houses nearby. 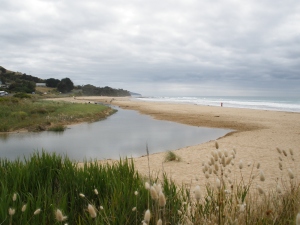 New Years Eve is traditionally a robust evening with lots of laughter and celebration. However I knew this year was to be different, I was still heavily medicated to relieve pain and it had to be a night without a celebratory drink. Unfortunately the drugs and the tiredness saw me heading home at about 9pm; so much for seeing the new year in.  I mention this as an example of how I still had not recovered from the trauma of the accident and my injuries. I was in denial and in hindsight should have taken things much more slowly.

The rest at the beach was very beneficial although I didn’t see much of the beach and spent many hours in front of the television watching sport or dvds. Not a bad thing to be doing.

We headed home around mid January and we both normally return to work at that time.  In my normal stubborn manner I tried to head off to work, now two months after the accident. I am Vice Principal of a large school and initially I was able to cope, as the teachers and students had not returned and I was able to work reduced hours.

I was in for a rude shock when the school became fully operational. After one week it was obvious to everyone (including me!!!) that this was not going to work. I had to reduce my hours by half to allow myself to recover. The hours remained this way until I went on leave to undergo surgery in March.

For anyone reading who has similar injuries, I suggest that whilst you want to work hard to recover, you should be prepared to give yourself time. The reality is that after  huge trauma on your body it needs time to rest and recover. Getting the balance between rest and pushing yourself is important and an individual thing.

I am a 58 years old. I am Senior Vice-Principal of Haileybury, Australia's largest private school. My passion outside of family and education is triathlon. I have raced over all distances with the highlight being completing the Ironman in 2011. Whilst training for my next Ironman I had an horrific accident which left me with a left brachial plexus injury.
View all posts by Craig Glass →
This entry was posted in Uncategorized. Bookmark the permalink.